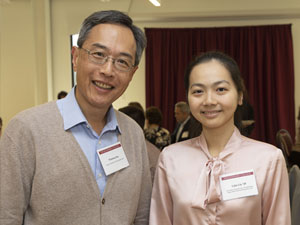 Winston Zee P’07 and his wife Peggy Chan P’07 attended Pacific Lutheran University. While they are both from Hong Kong, PLU is where they met. Because of that experience, both Winston and Peggy were “quite sold on a liberal arts education” and encouraged their son David to apply to at least one liberal arts school. While he also applied to the likes of Yale and Princeton, David ultimately chose Swarthmore.

“When David was growing up in Hong Kong, he was the kind of student who didn't have to work very hard but got through quite okay,” Zee says. “We were concerned that he wasn't taking his studies too seriously. That was, until he came to Swarthmore.”

Zee’s first gift to Swarthmore was an endowed scholarship followed by an endowed professorship, both named for his “better half,” Peggy. “When I retired from my law practice in 2015, I received a lump sum from the law firm,” Zee says. “I didn’t really need that money myself, and I wanted to put it in someone else's hands to do some good. Swarthmore gave me a very high degree of confidence that they will use the money and make something really good out of it. So I used that payout to create an annuity with the bank, through the life insurance arm of HSBC, and then I signed that over to Swarthmore.”

Zee continues: “Renée Atkinson was such a help. I live in Hong Kong, and apparently the bank had never seen something like this before. Renée helped me and the bank figure out how to assign this life insurance policy to a nonprofit.”

After attending David’s graduation in 2007, Zee made a point to visit his chemistry professor, Bob Paley (Edmund Allen Professor of Organic Chemistry). “I told him that I have to say thank you,” Zee says. “He was the first and only person I've ever met who was able to make my son work so hard.” David would stay in the lab “way past midnight” in order to earn honors for graduation. “It was the first time that I saw our son really take his education seriously.”

Since then, Zee has learned that Professed Paley was not an isolated case. “What impressed me and really made me want to give my support for Swarthmore is, to be honest, the faculty,” he says. “Paley was representative of all of Swarthmore’s faculty members. They all strike me as very talented experts in their fields who are committed to helping our children achieve their full potential.”

Zee currently serves on the Council for Presidential Initiatives (CPI) and has become more involved over the past several years. “With this gift I committed to establish an endowed interdisciplinary professorship. I have been very impressed by Swarthmore allowing students to develop an interdisciplinary type of pursuit,” he explains. “I ran into one student who was a double major in engineering and fine art. I asked him why he chose this interesting double major. He said, ‘eventually, my job as an engineer is to design and, of course, design things that work. But I also want to design things that people will find aesthetically appealing so that they want to use them.’ I thought that was such an interesting idea, and it really stuck with me.”

Zee encourages others to consider what type of legacy they could leave to benefit Swarthmore students. “We have the opportunity to look at Swarthmore’s track record with the endowment and how they were able to grow it and every year get something out of it for the school,” he concludes. “It gives me a lot of confidence that whatever amount I contribute to the school will be well managed. I have a high degree of trust that Swarthmore will put it to good use.”

Of any size to support the College’s goals and vision.